For some publishers on Facebook, it doesn’t always pay to pay.

Listicle publisher Ranker and lifestyle publisher Topix have, for years, employed profitable traffic arbitrage strategies, buying Facebook ads to acquire traffic that they can then monetize through ads that earn more than the cost of the ads. These operations were believed to help insulate the publications from Facebook’s January 2018 algorithm update that deprioritized publishers’ content in people’s news feeds. And that was true for a while. “January to June of 2018 was quite awesome,” said Topix CEO Chris Tolles.

However, starting on June 2018, things became less awesome, as both Ranker and Topix saw the effectiveness of their Facebook arbitrage operations diminish.

Ranker had planned to spend $40 million to promote its content as ads on Facebook in 2018. But the company only ended up spending half of that money, according to Ranker CEO Clark Benson. The reason was that at the beginning of June 2018, Ranker saw that the cost of its promoted, or boosted, posts increased by roughly 30% overnight.

Around that same time, Topix saw a similar issue with its Facebook ad buys. Facebook was not approving its ads as often as it had been previously, which made it difficult to run as many ads on the social network, according to Tolles. “There was a lot more pressure to look at things on an individual basis. So it was harder for us to find something that worked and press the spend,” he said.

Neither Benson nor Tolles knew exactly why their Facebook ad strategies were impacted, but they believed the issue is connected to Facebook’s efforts to clean up its platform following the 2016 U.S. presidential election cycle, in which bad actors ran ads on Facebook to promote fake-news articles. According to Facebook’s ad transparency tool, several of Ranker’s and Topix’s Facebook Pages have run ads about social issues, elections of politics. A Facebook spokesperson declined to comment on specific publishers but pointed to a company blog post published on October 2018 detailing the company’s efforts to cut down on low-quality ads.

When it comes to paid media on Facebook, “Facebook is very pedantic and makes a lot of effort now to make sure any information there is very accurate and validated and fact-checked, on the paid media side even more than the organic side,” said Guy Oranim, CEO of First Media, which began running ads on Facebook to drive traffic after launching a site for its publication So Yummy in September 2018. 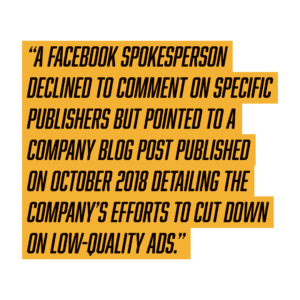 While neither Ranker nor Topix are Macedonian teens operating fake-news sites, they primarily publish articles, like lists and quizzes that resemble the clickbait and engagement bait that Facebook is trying to cut from its platform.

Additionally, the fact that the two publishers rely heavily on ads to drive traffic to their sites from Facebook may have been taken as a signal by Facebook’s algorithms and ad reviewers that they were misusing the ad platform. Tolles said the “vast majority” of Topix’s Facebook traffic comes from its ads. “We have not really spent a lot of time optimizing for organic reach,” he said.

While neither Ranker nor Topix welcomed the negative impact on their paid distribution strategies, both publishers have been able to weather the storm because they manage their Facebook ad buys to operate at a profit. Topix’s revenue grew by nearly 50% year over year in 2018, said Tolles, declining to say what revenue is. And Ranker has remained profitable, but while its revenue grew in 2018 versus 2017, the company’s revenue is expected to drop in 2019 because of the Facebook change, said Benson. Nonetheless, both Ranker and Topix have adjusted their Facebook strategies.

The content that Topix now promotes on Facebook “looks a lot more like a traditional publisher’s now: longer pages as opposed to a slideshow format for things that have large amounts of content,” said Tolles.

Ranker, meanwhile, has invested in growing its organic reach on Facebook. In the past, half of the publisher’s audience development team was dedicated to its paid distribution, and the other half focused on the organic side. Now that the entire team has prioritized the organic side, and Ranker has seen its organic traffic from Facebook increased by roughly 50% compared to last year.

Both Ranker and Topix continue to advertise on Facebook to drive traffic to their sites. However, they each have cut back on that spending. While Tolles declined to share specifics, Topix is spending “back to the upper end” of the $1 million to $3 million that it had been spending, on average, each month on Facebook ads in 2017, though not as much as it had been spending in the first half of 2018, he said. Ranker’s monthly Facebook ad spend had been in the seven figures before the June 2018 change and is now in the high five figures, Benson said.

Advertising on Facebook to acquire site traffic “still works and it still comes in at a decent margin. But we only dedicate one or two staffers to it. It’s just really a function of shifting resources,” Benson said.

This article was originally published on Digiday.com