Outbrain and Taboola — the Ross and Rachel “will they, won’t they” online advertising story of our times — could finally have its happy ending.

On Thursday, Taboola said it will acquire Outbrain for $250 million in cash and 30% equity of the combined company. The merged company’s valuation could not be determined but both privately held companies are reported to have “unicorn” status, with valuations north of $1 billion. Both say they are profitable and the two content recommendation companies have each raised around $150 million in funding.

Taboola and Outbrain, the two biggest names in the sector, have for years duked it out for the most lucrative publisher deals and a Taboolabrain merger has long been rumored. Now the two are joining forces to create a content recommendation monolith they say will give advertisers access to a new scaled player in an online ad market dominated by Google, Facebook and, increasingly, Amazon.

The combination could have a big impact on publishers, which have long leaned heavily on content recommendation companies that appear at the bottom of articles, for a sizeable and reliable portion of their online ad revenues. Taboola and Outbrain, both founded in Israel just a year apart in the mid-2000s, have been fierce rivals, cutting large — seemingly uneconomic — guarantee and revenue share deals to gain exclusive partnerships with the world’s largest publishers.

“The risk for us is that we see downward price pressure,” said a publishing executive at a national newspaper company.

Another executive at a different newspaper said his initial reaction was less about the money but more about the quality of ads that would now make it through the filter onto article pages.

“My concern would be that by coming together and an inability to pitch their quality control or safeguards against each other, we end up with the race to the bottom,” the publishing executive said. The situation could also go the other way: With more engineers tackling the issue, fewer low-quality ads could slip through the net. 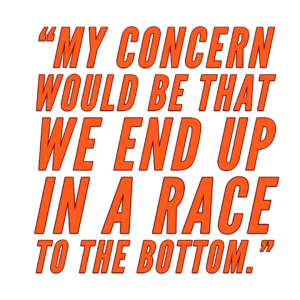 Taboola said it is on track to hit the $1 billion revenue mark in 2019, while Outbrain declined to share financials. The combined entity will have more than 2,000 employees and some 20,000 clients

The combined company will be called Taboola and current Taboola CEO Adam Singolda will continue in that role. Outbrain co-founder and co-CEO Yaron Galai will move into an advisory position — the exact job title has not been announced — to assist with the merger and will remain with the company for 12 months after its completion. Taboola COO Eldad Maniv and Outbrain co-CEO David Kostman will work on the post-merger integration, the companies said in a press release. Their new roles also have not been announced.

The pair, now both headquartered in New York where a large number of their publisher and advertiser clients are based, expanded their product offerings over the years from sponsored links to include video, analytics, programmatic advertising, and editorial products.

Taboola and Outbrain say the merger will present advertisers with a more sizeable alternative to Google and Facebook. Outbrain and Taboola’s clients include CNBC, CNN, The Washington Post and the BBC and the companies say they reach 1.2 billion and 1.4 billion people a month respectively. The combination of the two content recommendation companies’ platforms will also be more efficient for advertisers looking to buy sponsored links across the web, the companies said.

The new Taboola says it will also increase revenue for publishers and its mobile carrier and handset manufacturer partners, thanks to increased combined investment in technology and product. Singolda said he is hoping the company will expand its offerings in areas including video, data and mobile app-install ads.

Singolda said he believes the new Taboola can “double and triple” revenue for publishers as a bigger entity should encourage more advertisers to consider switching a portion of their search and social spend to advertising on the open web.

As for the future of Taboola itself, an IPO appears to be a logical step. Outbrain filed confidentially for approval to list its shares on the Nasdaq in 2014, The Wall Street Journal reported.

“[An IPO] is obviously one of the routes for a company of our size,” Galai said. “We are absolutely looking to keep this company independent and sustainable.”

This article was originally published on Digiday.com